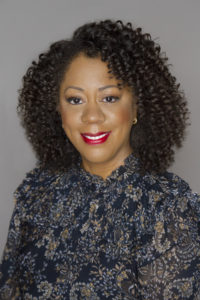 Michelle Gadsden-Williams is the Managing Director and Global Head of Diversity, Equity and Inclusion for BlackRock. She is an award-winning global diversity executive, author, activist, producer and philanthropist with more than 25 years of experience as an advocate for equality within corporate America and a thought leader around diversity and inclusion. Michelle is a seasoned diversity practitioner with experience working in the consumer goods, pharmaceutical and financial services industries before transitioning to professional services in 2017.

Michelle is the former, Managing Director of Inclusion & Diversity for Accenture North America. She provided strategic direction, thought leadership and championed the development of an inclusive environment by integrating diversity practice into all aspects of the business. She has held positions of global responsibility in the diversity management arena by living in Switzerland for close to 10 years of her corporate career and managed staffing functions for large multi­national corporations such as Credit Suisse, Novartis and Merck & Co, Inc. Prior to her tenure at Merck & Co., Inc, Michelle has also held positions in Human Resources and Product Development at Philips­Van Heusen Corporation and Wakefern Food Corporation, both headquartered in New Jersey.

Michelle has acquired a multitude of community service awards and accolades for her work as a diversity practitioner. She has been recognized by Black Enterprise as one of the Top Executives in Corporate Diversity for 2019, 2018, 2017. The Reverend Al Sharpton recognized Michelle as a 2016 honoree at the National Action Network “Woman of Power” Luncheon, an honoree at the Black Institute Awards Gala in NYC and a 2015 Ebony Magazine Power 100 honoree. Throughout her career, Michelle has been profiled in Black Enterprise Magazine, DiversityInc, Diversity Executive, Ebony, Essence, Fortune, History Makers, Heart & Soul, Jet, New Vision, Science Magazine, Sister to Sister, The New York Times, The Wall Street Journal, Target Market News and was recognized as one of 40 Outstanding Executives Under 40 in America in 2006 by the Network Journal. Her other notable tributes include: being named the 2010 recipient of the Maya Way Award for Diversity Leadership by the incomparable Dr. Maya Angelou, receiving the 2008 Harvard Black Men’s Forum Businesswoman of the Year Award, accepting the Rainbow Push Coalition’s Bridge Builder Award by the honorable Reverend Jesse L. Jackson and also being recognized with an honorary Doctorate of Humane Letters degree from Kean University for her outstanding personal and professional accomplishments in the field of diversity and inclusion. In 2013 Michelle was appointed as a member of the Global Advisory Council on Gender Parity for the World Economic Forum in Davos, Switzerland.

Michelle earned a B.S. in Marketing, a B.A. in Communications from Kean College of New Jersey and an M.S. in Organizational Dynamics from the University of Pennsylvania. She is a proud member of Alpha Kappa Alpha Sorority Incorporated and the Executive Leadership Council. Michelle serves on several boards including the Jackie Robinson Foundation, The Art Center in Pasadena, CA and a member of the Women’s Leadership Board of the John F. Kennedy School of Government at Harvard University. Michelle and her husband, David Jamal Williams, live in New York City.