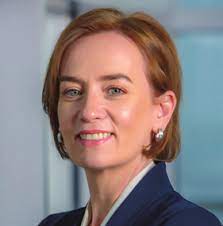 Eimear Bonner is vice president and chief technology officer for Chevron Corporation, positions she assumed in 2021. She also serves as president of the Chevron Technical Center, which provides expertise to drive the application of technology, initiatives to transform Chevron’s digital future, and innovative breakthrough technology to support the future of energy. Previously, Bonner served as general director of Chevron’s largest joint venture, Tengizchevroil (TCO), in Kazakhstan since 2018. Prior to that, she served as TCO general manager of operations. Bonner began her career as an offshore petroleum engineer in the United Kingdom. Over her 23-year career with Chevron, she has held numerous leadership and engineering positions in the United Kingdom, Thailand, Kazakhstan and the United States. Eimear received her bachelor’s degree in Chemical Engineering from Queen’s University Belfast, and her master’s degrees in Advanced Chemical Engineering and Petroleum Engineering from Imperial College, London.