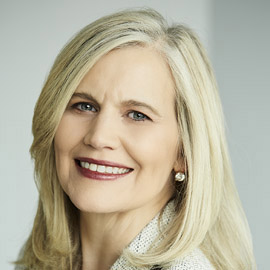 Lori Beer is the Global Chief Information Officer (CIO) of JPMorgan Chase & Co. and a member of the company’s Operating Committee, responsible for the firm’s technology systems and infrastructure worldwide. Beer manages a
14 billion budget and over 55,000 technologists supporting JPMorgan Chase’s retail, wholesale and asset and wealth management businesses. She also serves as the co-sponsor of the firm’s Access Ability Business Resource Group. Prior to joining the firm, she was Executive Vice President of Specialty Businesses and Information Technology for WellPoint, Inc., responsible for a 10 billion business unit, which included WellPoint’s Specialty Products. Beer is a member of the Teach for America New York Advisory Board. She’s also a member of the University of Cincinnati’s Lindner College of Business Advisory Council and the University of Cincinnati Foundation Board of Trustees. She has endowed scholarships at the University of Cincinnati, where she holds a Doctor of Commercial Science, honoris causa and the University of Dayton, where she holds an honorary doctorate of science, to help increase diversity in STEM careers. Beer holds a Bachelor of Science degree in Computer Science from the University of Dayton.