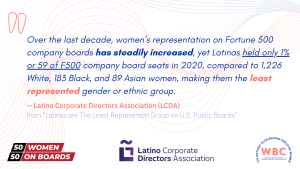 The following is an excerpt from the Women Leading Boards April 2022 Special Report – In Partnership With 50/50 Women On Boards™. Click here to view and download the full report.

Over the last decade, women’s representation on Fortune 500 (F500) company boards has steadily increased, yet Latinas held only 1% or 59 of F500 company board seats in 2020, compared to 1,226 White, 183 Black, and 89 Asian women, making them the least represented gender or ethnic group.

Concerned by the lack of Latina appointments, Latino Corporate Directors Association (LCDA) evaluated research of the ethnic and racial composition of public company boards, and found that Latinas have lost ground with only a 0.2% increase in F500 board seatsfrom 2018 to 2020.

Through the delivery of premiere data and research, LCDA eliminates the excuse that board-qualified Latinas cannot be identified. There is an ample supply of qualified and experienced Latina directors and C-level Latinas from an array of industry sectors. In 2021, LCDA directly and indirectly influenced a historic jump in Latino public company board appointments. Latina(o) appointments increased nearly 4 times from a total of 93 in 2020 to nearly 347 in 2021 – 42% of those 2021 appointments went to Latinas.

Nationally, Latinas comprise nearly 10% of the total U.S. population, but hold only 1% of Fortune 500 board seats. LCDA believes it is critical that public company boards include Latinas(os), and is committed to serving as a resource for research and talent through our network of accomplished executives at the highest levels of corporate leadership.

As the nation’s largest ethnic group, Latinos accounted for 51.1% of the country’s demographic growth over the last decade, with the total population growing to 62.1 million, which is almost 20% of the U.S. population, according to newly released data in the 2020 Census.

These numbers reflect a massive and growing Latino market, with the Latino GDP growing 72% faster than non-Latino GDP from 2010-2018. At a time when diversity is recognized as a business imperative, companies would be wise to tap qualified Latinos for their boardrooms.

Companies that do not capitalize on the value of a Latino perspective are missing out on market share, according to the Latino Donor Collaborative (LDC) Facts Poster and U S Census Bureau: