Moving the Needle on Equal Pay 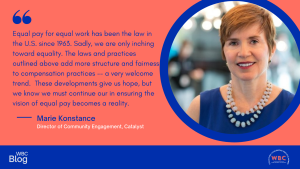 Progress on pay parity has proved elusive. The pay gap between women and men is 82 cents on the dollar in the U.S. and has been in the 80-83 cent range for the last 16 years. The gap is especially wide for women of color. Black women were paid just 63% of what non-Hispanic white men were paid in 2019.

The pay gap in Asia is 19.3%, in Latin America  29.8%, and in Africa women continue to earn significantly less than men according to the UN.

Equal pay advocates are working to address this. In 2003, that over $8 billion have been spent on diversity efforts such as training, recruitment, eliminating biases in promotions and hiring, mentoring and sponsorship, and making work life more flexible and inclusive.  These initiatives focus on moving more women up the corporate ladder into higher-paying jobs to reduce the pay gap.

But the disparity persists even when women have the same jobs as men. Researchers estimate that, on average, women are paid 2%-5% less than men. Public policy and company practices can move the needle. Here’s how:

This process begins by evaluating similar roles and setting pay ranges; assessing why people should be paid differently (i.e. location, tenure, or performance); and creating model that reviews the employee’s compensation and these relevant factors against the set pay range for the role. If the model indicates some people are underpaid, the company often aligns their compensation closer to the higher rate.

Equal pay for equal work has been the law in the U.S. since 1963. Sadly, we are only inching toward equality. The laws and practices outlined above add more structure and fairness to compensation practices — a very welcome trend.  These developments give us hope, but we know we must continue our in ensuring the vision of equal pay becomes a reality.

Marie Konstance is Director, Community Engagement at Catalyst, where she helped establish and manages the Gender and Diversity KPI Alliance (GDKA), which promotes the adoption of three key performance indicators to measure gender and diversity.

The Leap to Your Genius – Leaders and Overachievers: This Is for You!