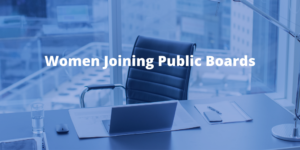 The Women Joining Public Boards report shows the numbers, rate and profiles of women appointed to public boards with a focus on diversity and analysis of the industry sectors where women are participating on boards. This first report covers October 2020 as this is the first time the comprehensive data for women joining boards of public companies has been compiled and analyzed.

In October 2020, public companies appointed women to fill 40.2% of board seats. 123 women were named to public boards last month, and two of those women joined the boards of more than one company.  It is noteworthy that several high-profile women are included in the list. Among them, Valerie B. Jarrett, a former senior advisor to President Obama, was named to the Walgreens Boots Alliance Inc.; and Dr. Nancy Snyderman, a former journalist with ABC News, was named to the Lyra Therapeutics board.

Companies named in the report represent various industries to include high-tech, biotechnology/pharmaceutical, energy and retail. 22% of women appointed were appointed to boards of public companies in the healthcare sector and 17.6% of women appointed were appointed to board of public companies in the technology sector. This is interesting as it includes companies like Adobe and Inuit and the trends for increasing numbers of women of color on boards continues.

We will continue to track not only the women, in terms of numbers, diversity and profile; but the companies and in which industries are women board members and how many of the overall board seats are held by women. The time is now for women to sit across all companies, all boards and all sectors.  Join us in tracking, analyzing, promoting and celebrating women on boards of public companies.

To view the data and see the appointees visit our Women Joining Public Boards website: boards.womenceoreport.org!